Companions have taken most constructed formats by storm, which made us wonder the obvious question: how busted are companions in Commander? To answer this question, each of us have built a deck using a different companion in the companion zone! Since none of the Goldfish crew has any experience with companions in Commander, we enlisted the help of someone who already has such a deck: Joseph Schultz, editor and content contributor at EDHREC and host of EDHRECast! Here’s what we’ve got:

Richard figures if Lurrus is banned in Vintage then it has to be pretty decent in Commander too, where it’s supporting Karlov of the Ghost Council

Seth will never miss an opportunity to build a Panharmonicon deck or draw cards, so when he saw the ETB card draw trigger of Keruga he knew what he must do, building Yarok, the Desecrated

How fast will Joey kill his opponents? Will Richard make a good argument for Lurrus to be banned in Commander? Will Seth durdle and draw cards (of course he will)? Find out on this episode of Commander Clash!

Today’s video is brought to you by Card Kingdom. You can pick up some cards and support the show at https://www.cardkingdom.com 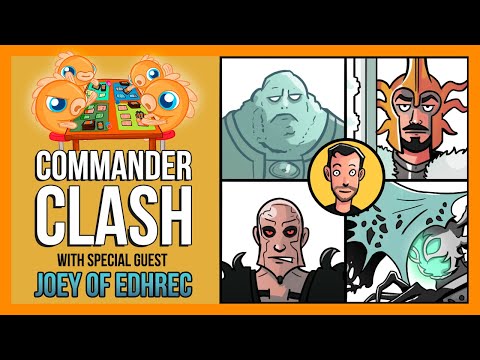 Admin - 22/01/2021 0
What are the odds of successful with The Wanderer (and Command the Dreadhorde and Syr Kondad) in Standard? Let's discover out! Today's video is...

Admin - 20/11/2020 0
Can our opponent's contact our funds Colossus Hammer brew for Modern? No, they cannot. ◼ This episode of Budget Magic is delivered to you...